Prerequisites: Suggested—Rifle 125 or similar class. If you have not attended Rifle 125, then you should be able to reliably hit a 10″ paper plate from the standing position out to 25 yards. You should be familiar with basic operation of your carbine and firearms safety.

Equipment: Please review our suggestions on what to bring. You can order accessories that our volunteers have found helpful as well.

This course is conducted as an NRA America’s Rifle Challenge clinic. Students will learn modern defensive shooting skills on the AR platform. Attendees will experience shooting in multiple firing positions at varying distances. While this course is named for the common round fired by the AR-15 (“.223 Remington”) any safe semi-automatic carbine can be used.

All firing in this course will be within 200 yards with a focus on the close quarters environment from contact to 50 yards. You will get a workout with skills needed to run the carbine from in your face to 100 yards.

This class is moderately physically demanding. We will be on our feet much of the day, moving between various positions on the range. We will be shooting from different positions throughout the day.

The CQB Battle at the Jason Russell House

We’ll discuss specifics of this Close Quarters Battle that took place inside a home in the Boston suburb of Menotomy on April 19th, 1775—the very first day of the American Revolutionary War. Hear our history come alive as orators tell the story of several pivotal shots that changed the course of not only this historic battle, but the history of the world!

At this event, you’ll go from basic movements to shooting over & around barricades. You’ll also learn how to hit targets right in front of you all the way out to 200 yards.

No special equipment needed. A carbine w/sling, two mags and ammo. Run a standard, no frills M-4 with an extra mag in your pocket or wear your favorite plate carrier, helmet and battle belt chock full of mags for your tricked out SCAR. Shooters choice! 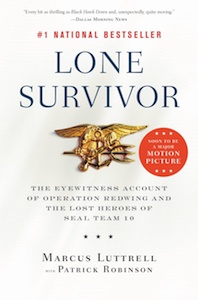 At every Revere’s Riders event we tell some of the history of April 19th, 1775 and the Battles of Lexington and Concord, events that occurred over 240 years ago. The spirit of the heroes who gave the full measure of their “lives, fortune and sacred honor” on April 19th, 1775 still lives on in the modern United States military.

I doubt Marcus Luttrell needs any introduction to those contemplating attending this event. For those who don’t already know his story, Marcus was deployed to Afghanistan in 2005 with Seal Team Ten as a Hospital Corpsman Second Class. He and three other members of Seal Team Ten (Navy Lieutenant Michael P. Murphy, operation commander, Petty Officer Second Class Danny Dietz and Petty Officer Second Class Matthew G. Axelson) were assigned to Operation Red Wings.

During the initial stages of Operation Red Wings, the team was discovered by local Afghan goat herders. After determining the goat herders were most likely civilians and not combatants, the team released them according to the ROE (“rules of engagement”). The goat herders would inform the Taliban of the team’s position and all but Luttrell would become casualties in the ensuring battle.

Tickets are not available as this event has passed.