When you participate in a Revere’s Riders marksmanship clinic or match, you’re connecting with the heritage of American marksman going back for a century. At each Revere’s Riders marksmanship clinic or match, participants typically have a chance to challenge a skills test. Our skills tests are all based on elements of classic American courses of fire.

Perhaps the earliest formal “course of fire” test we have accounts of is the famous test required to join Daniel Morgan’s famous corps of riflemen early in the American Revolution.  Clad all in brown, these rifleman played a key role in a number of Revolutionary War campaigns.  Today, we honor them with a number of specific shooting skills tests; additionally, we’ve adopted their plain brown color as one of our key colors:  when you receive a plain brown patch as a marksmanship award at a Revere’s Riders event, it is in the tradition of early frontier marksmen. 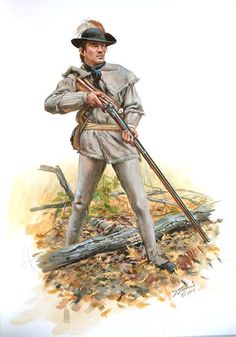 While individual marksmanship was critical to the American Revolution’s success, there was little support for formal training following the succesful completion of the war.  Congress was reluctant to appropriate funds for the Army, and the situation was much the same for state militias.  Moreover, smoothbore muskets were inaccurate beyond 50 to 100 yards and many leaders didn’t see the point in individual marksmanship skills.  Units of rifle-equipped sharpshooters were formed and disbanded a number of times over the decades.

This situation generally persisted until around 1856, when the US Army began to get serious about individual marksmanship training.  The initial fielding of rifled muskets made consistent long range accuracy possible.  The Army initially took steps to create a 200-700 yard practice course for the new Model 1855 Rifled Muskets.  By 1858, Captain Henry Heth published “A System of Target Practice for the Use of Troops When Armed with the Musket, Rifle-Musket, Rifle, or Carbine.”  This publication prescribed firing from 150 to 1000 yards.  Targets at the 150-225 yard range were about 22″ wide, a general target size that persists through the American tradition.  Also in 1858, the Army instituted formal marksmanship awards to promote practice both among the regular army and militia.

Despite these initial attempts, most marksmanship training was dismal through the Civil War.  Captain Heth’s manual was largely abandoned and unit leaders were left to devise their own training regimens.  Entire regiments were sent into combat with little to no marksmanship practice.

In 1871, a number of Union civil war veterans, determined to preserve the hard-won marksmanship lessons of the war, formed the National Rifle Association.  Much as today, the NRA was dedicated to improving marksmanship training for citizens, the militia, and soldiers.  The initial activities of the NRA were to establish a world-class training facility near New York City called Creedmore, where uniform targets, scoring, and training were adopted for the National Guard and others.  By 1875, the National Guard of New York, working closely with the NRA, began to issue formal awards with a single word:  “MARKSMAN.”

Early examples of Marksman badges from the NY National Guard.

After the civil war, the Army also took halting steps to improve the situation.  Soldiers were awarded ten rounds for pratice each month, a significant step forward in the cash-strapped Army bureaucracy.  The Western Departments along the frontier took more aggressive steps.  By 1877, the Department of Texas published uniform standards:  firing from the standing position up to 300 yards, kneeling from 300-450, and 450+ yards in hte prone.  Targets within 300 yards featured a 8″ bull, 26″ center, and 46″ outer ring.  Beyond 300 yards, targets were larger — 22″ bulls, 38″ centers, and 54″ outer rings.  These Texas targets became the “NRA Third Class” target and would resonate for more years to follow.  The Army followed the NRA’s lead and began issuing “MARKSMAN” badges in 1879.

Many units began to add visual representations of the targets to their awards.  This design yields the distinctive Marksman’s badge, which we honor today in our awards. 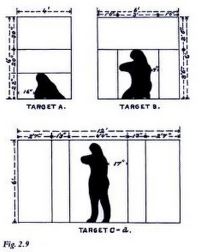 Some of the first “hits count” Field Fire targets from the late 19th century.

From the 1890s through WW1, the Army struggled with two philosophies.  One was the NRA “Creedmore” inspired philosophy that emphasized long range firing with tuned rifles at targets with multiple scoring areas, emphasizing accuracy.  Individual shooters needed to have the skills to select targets, estimate ranges, set sights, and fire carefully.

The other philosophy was “Field Fire.”  Field Fire emphasized realistic targets with a single scoring area under the idea that a close miss was worthless — only hits count.  Furthermore, this philosophy stated that it was unrealistic to expect individuals to select targets and estimate ranges and left those tasks to officers or coaches.

We adopt elements of each camp in our current clinics.  We embrace the practical “hits count” philosophy of Field Fire but also demand riflemen to develop the skill to detect targets, estimate range, and call their shots.

The Legacy of the National Matches

In February 1903, an amendment to the War Department Appropriations Bill established the National Board for the Promotion of Rifle Practice (NBPRP). This government advisory board became the predecessor to today’s Corporation for the Promotion of Rifle Practice and Firearms Safety, Inc. that now governs the CMP. The 1903 legislation also established the National Matches, commissioned the National Trophy and provided funding to support the Matches. This historic legislation grew out of a desire to improve military marksmanship and national defense preparedness.  – Source

The CMP provides important heritage for us today.  The National Trophy Matches served as a unifying force that brought together many distinct strands of thought from the NRA, Army, and state National Guards and militias.  By establishing national matches, we today can inherit a rich legacy of marksmanship.

Current thought in service rifle and pistol marksmanship was collected, updated, and codified via the national matches.  Today, we know these events as “service rifle” or “service pistol.”  A number of other unique events such as the “Battle Rattle” also hail from this tradition.

Our courses of fire at Revere’s Riders events largely hail from the CMP tradition.  Further posts will explore how we have adapted courses of fire that have their roots in these early National Matches.  Our rifle, pistol, and carbine events all have links to the CMP experience as well as WW2-era marksman traditions.

When attending a Revere’s Riders event, you aren’t just getting great practice.  You’re connecting with a rich heritage of American Marksmanship. 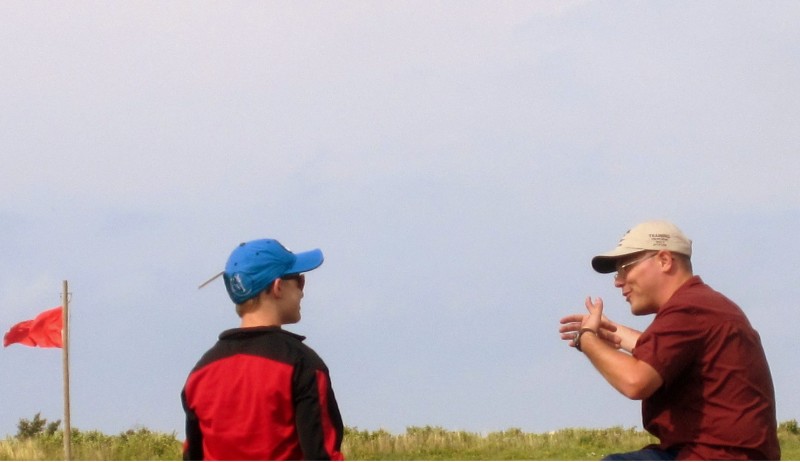 One of our coaches works with a youth shooter at the CMP Small Arms Firing School at Camp Perry…  The tradition of the National Matches continues today!

For Further Reading:  Check out Marksmanship in the U.S. Army by William K. Emerson.