On This Day: Thomas Jefferson is Born 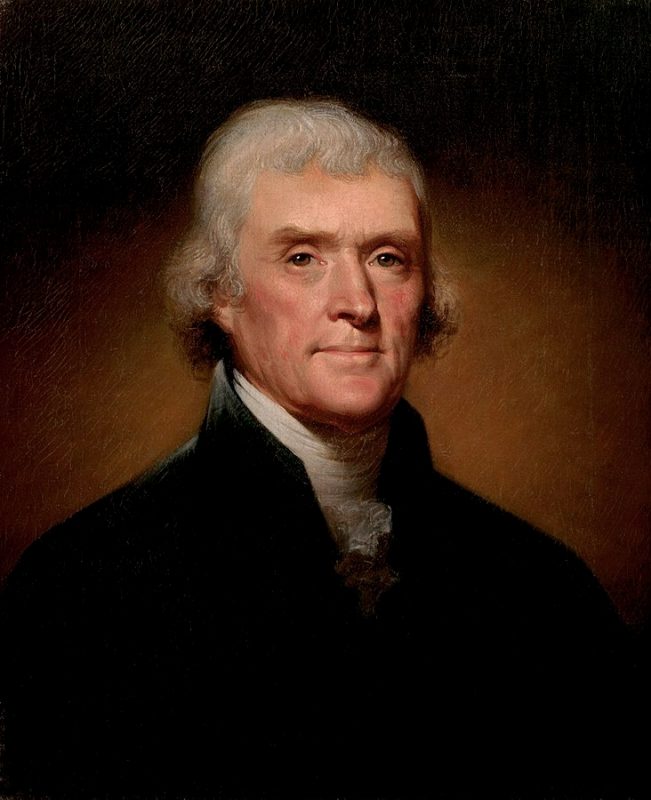 Thomas Jefferson, principle author of the Declaration of Independence, representative for Virginia to the Continental Congress, 3rd President of the United States, 1st Secretary of State under George Washington, 2nd Governor of the state of Virginia, diplomat, lawyer, philosopher and statesman, was born on this day in 1743.

Thomas Jefferson was born in Shadwell, Virginia, the third of ten children. His father, Peter Jefferson, was a planter and surveyor who died when Thomas was fourteen; his mother was Jane Randolph. On his father’s death, Thomas inherited approximately 5,000 acres of land, including Monticello.

Jefferson attended the College of William and Mary at the age of 16 and studied mathematics, metaphysics and philosophy. Thomas wasted much of his first year at college; by his sophomore year, he made a personal promise to apply himself more to his studies. He fulfilled his promise by studying 15 hours per day and graduated two years later in 1762.

After college, Thomas apprenticed in the law office of George Wythe. During this time, Jefferson authored a survey on his extensive readings titled Commonplace Book. Wythe was so impressed with Jefferson that he would donate his entire library to him.

During his lifetime, Jefferson compiled three libraries. The first consisting of approximately 200 books inherited from his father and George Wythe was destroyed in a 1770 fire. By 1773, he had rebuilt his collection to 1,250 titles which later grew to almost 6,500 volumes by 1814. When the British burned the Library of Congress during the War of 1812, Jefferson sold this collection for $23,950 to the United States government to form the beginnings of the new Library of Congress. Thomas then used a portion of this money to pay off some of his debts but soon started work on a third personal library that would accumulate to nearly 2,000 volumes upon his death.

At the young age of 33, Jefferson was the principal author of the Declaration of Independence. On June 11, 1776, the Second Continental Congress appointed a “Committee of Five” to draft a declaration, consisting of John Adams of Massachusetts, Benjamin Franklin of Pennsylvania, Thomas Jefferson of Virginia, Robert R. Livingston of New York and Roger Sherman of Connecticut. The Committee of Five recorded no minutes of it’s meetings so the exact discussions and process is unknown beyond personal recollections recorded years later. What is definitively known is that the committee discussed a general outline of the document and that Thomas Jefferson was appointed to write the first draft. Jefferson was chosen despite the committee’s general agreement that John Adams should write the document; Adams demurred and lobbied heavily for Jefferson to be the principal author.

The Committee of Five submitted their initial draft titled “A Declaration by the Representatives of the United States of America, in General Congress assembled” to the Second Continental Congress on June 28, 1776. Over the next two days, Jefferson’s document was heavily edited and shortened by a fourth. Finally, on July 2, 1776, twelve colonial delegates to Congress voted in the affirmative to officially declare their independence from Great Britain (New York abstained as it’s representatives to Congress were not authorized to vote on independence). On July 4, 1776, the final wording for the Declaration of Independence was approved by Congress and sent to the printer for publication.

Jefferson succeeded Benjamin Franklin as Minister to France in 1785 and which appointment he kept for five years. During his time in France, Thomas became a regular companion of the Marquis de Lafayette, a French hero of the Revolutionary War. During the French Revolution, Jefferson’s residence in Paris, the Hôtel de Langeac, was used by Lafayette for meetings and other business.

In 1800, Jefferson ran for President against John Adams (Jefferson was Vice President under John Adams during the previous presidency). In these early elections, votes were cast only for President; the runner-up in the election became Vice President. Ironically, Jefferson ended up in an electoral vote tie with his “running mate” Aaron Burr with each receiving 73 electoral votes. Breaking the tie fell to the House of Representatives which needed 36 ballots before they were able to choose Jefferson over Burr.

During Jefferson’s presidency, the Louisiana Purchase from France in 1803 doubled the size of the United States. Jefferson envisioned expanding United States territory even further to the west and appointed Merriwether Lewis and William Clark to be leaders of the Corps of Discovery. Jefferson personally tutored Lewis in the sciences of mapping, botany, natural history, mineralogy, and astronomy and navigation, while giving him unlimited access to his library at Monticello. Lewis and Clark would embark on their expedition in May 1804 and reached the Pacific Ocean at the mouth of the Columbia River in November 1805.

Jefferson was re-elected to the presidency in 1804 with George Clinton as his running mate. Jefferson’s vice president during his first presidency, Aaron Burr, was soundly defeated in a campaign to be elected governor of New York. During that campaign, Alexander Hamilton made callous remarks concerning Burr’s moral character leading to their fateful duel on July 11, 1804 and the mortal wounding of Hamilton. Burr’s reputation was ruined and he resorted to ever more devious plots to regain power, eventually leading a military flotilla of 60 men down the Ohio River resulting in Jefferson ordering his arrest. Burr was captured in February 1807 and sent to Virginia to, ironically, undergo trial for treason.

Jefferson attempted to influence the trial by informing Congress that Burr’s guilt was “beyond question”; the trial came before John Marshall, one of Jefferson’s longtime political foes, who dismissed the treason charge. Jefferson was at one point subpoenaed to testify in the trial, but refused and, in so doing, made the first argument for “executive privilege”. Jefferson instead provided relevant legal documents.

In 1804, Abigail Adams attempted to reconcile Jefferson and Adams.

Jefferson and John Adams had been good friends in the first decades of their political careers, serving together in the Continental Congress in the 1770s and in Europe in the 1780s. The Federalist/Republican split of the 1790s divided them, however, and Adams felt betrayed by Jefferson’s sponsorship of partisan attacks, such as those of James Callender. Jefferson, on the other hand, was angered at Adams for his appointment of “midnight judges”.[235] The two men did not communicate directly for more than a decade after Jefferson succeeded Adams as president.[236] A brief correspondence took place between Abigail Adams and Jefferson after Jefferson’s daughter “Polly” died in 1804, in an attempt at reconciliation unknown to Adams. However, an exchange of letters resumed open hostilities between Adams and Jefferson.[235]

As early as 1809, Benjamin Rush, signer of the Declaration of Independence, desired that Jefferson and Adams reconcile and began to prod the two through correspondence to re-establish contact.[235] In 1812, Adams wrote a short New Year’s greeting to Jefferson, prompted earlier by Rush, to which Jefferson warmly responded. Thus began what historian David McCullough calls “one of the most extraordinary correspondences in American history”.[237] Over the next fourteen years, the former presidents exchanged 158 letters discussing their political differences, justifying their respective roles in events, and debating the revolution’s import to the world.[238] When Adams died, his last words included an acknowledgement of his longtime friend and rival: “Thomas Jefferson survives”, unaware that Jefferson had died several hours before.[239][240]

Believe me, dear Sir: there is not in the British empire a man who more cordially loves a union with Great Britain than I do. But, by the God that made me, I will cease to exist before I yield to a connection on such terms as the British Parliament propose; and in this, I think I speak the sentiments of America.

The tree of liberty must be refreshed from time to time with the blood of patriots and tyrants.

A wise and frugal government, which shall restrain men from injuring one another, shall leave them otherwise free to regulate their own pursuits of industry and improvement, and shall not take from the mouth of labor the bread it has earned.

Rightful liberty is unobstructed action according to our will within limits drawn around us by the equal rights of others. I do not add ‘within the limits of the law’ because law is often but the tyrant’s will, and always so when it violates the rights of the individual.

John Adams (on his deathbed, not realizing that Thomas Jefferson had died only a few hours before)