In his General Orders of August 7, 1782 issued from his headquarters in Newburgh, New York, George Washington decreed the creation of two Honorary Badges of Distinction and a Badge of Military Merit. Previous custom was to only present military honors to the high-ranking officers of victorious forces rather than honoring individual soldiers.

Of the Badge of Military Merit, Washington said: 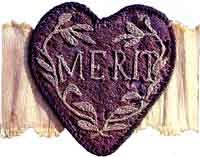 “The General ever desirous to cherish virtuous ambition in his soldiers, as well as to foster and encourage every species of Military merit, directs that whenever any singularly meritorious action is performed, the author of it shall be permitted to wear on his facings over the left breast, the figure of a heart in purple cloth, or silk, edged with narrow lace or binding. Not only instances of unusual gallantry, but also of extraordinary fidelity and essential service in any way shall meet with a due reward. Before this favour can be conferred on any man, the particular fact, or facts, on which it is to be grounded must be set forth to the Commander in Chief accompanied with certificates from the Commanding officers of the regiment and brigade to which the Candadate for reward belonged, or other incontestable proofs, and upon granting it, the name and regiment of the person with the action so certified are to be enrolled in the book of merit which will be kept at the orderly office. Men who have merited this last distinction to be suffered to pass all guards and sentinals which officers are permitted to do. The road to glory in a patriot army and a free country is thus open to all. This order is also to have retrospect to the earliest stages of the war, and to be considered as a permanent one.”

Only three soldiers are believed to have received the Badge of Military Merit during the Revolutionary War; each was a non-commissioned officer and received the honor from General Washington himself: