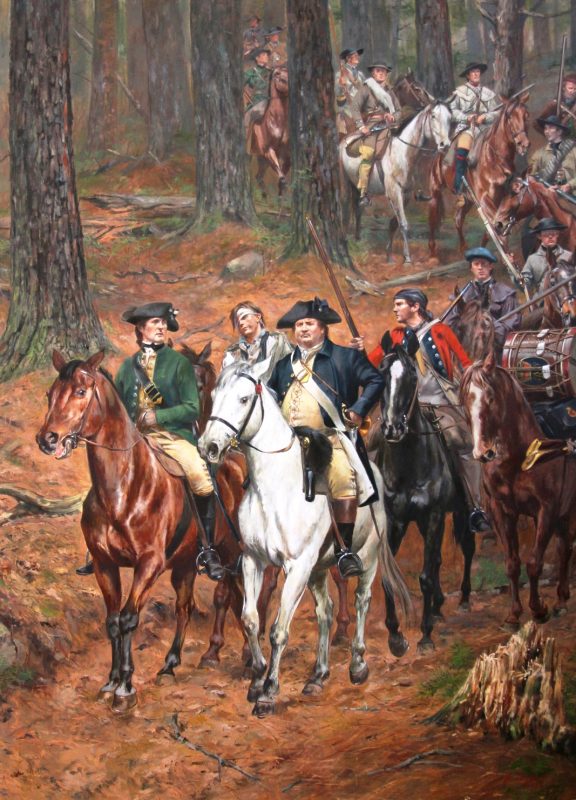 On this day, August 8, 1754 in Philadelphia, Pennsylvania, Joseph Greer was born. One of eleven children, his family would move to the frontier of Staunton, Virginia and later the Watauga River area of Tennessee. In 1769 Joseph, his father and brothers were among 40 men who would defend Fort Watauga from more than 300 Indians—he had just turned 15.

During the American Revolution, he would serve under Col. John Sevier. In his third tour, he fought in the Battle of Kings Mountain on October 7th, 1780.

Lord Cornwallis recruited 1,000 or so American Loyalist Tories and trained them to fight using European open-field tactics. Cornwallis ordered the Loyalist Tories under the command of Major Patrick Ferguson to western North Carolina. Ferguson sent a message to the patriots in the Watauga settlements threatening “…that if they did not desist from their opposition to the British arms, and take protection under his standard, he would march his army over the mountains, hang their leaders, and lay their country waste with fire and sword.”

Defying Major Ferguson’s threat, Patriot leaders Isaac Shelby, John Sevier, William Campbell, Charles McDowell and Benjamin Cleveland joined their forces at Sycamore Shoals on the Watauga River (in present day Tennessee) to hunt down Ferguson’s Loyalists before they could mount an attack. Their combined forces numbered around 1,400 men while Ferguson’s counted around 1,200.

The Patriots sent 900 of their men ahead on horseback to meet Ferguson’s Loyalists as quickly as possible. The Patriots marched through day and night, through pouring rain and intermittent showers. That force reached Kings Mountain, a forested mountain with a rocky summit, near the border between North and South Carolina where Ferguson was camped.

Ferguson was so sure of the ease of defending his position on Kings Mountain that he has been quoted as saying, “…he was king of that mountain and that God Almighty and all the Rebels of hell could not drive him from it.” His belief was founded on the supposition that his soldiers could easily deploy plunging fire upon the Patriots as soon as they attempted to scale the rocky cliffs around Kings Mountain. However, Ferguson did not count on the fact that doing so would expose his Loyalist troops to fire from the Patriots as well. The Loyalists training in European style open-field tactics (which did not stress accurate marksmanship) would turn out to be the undoing of the Loyalists.

The Patriots surrounded Kings Mountain and around 3:00PM commenced their attack. Patriot regiments would attack and be beaten back by the Loyalists until finally the regiments commanded by Colonels Isaac Shelby, John Sevier and William Campbell were able to reach the summit.  They attacked the Loyalists on the summit from their rear and eventually Major Ferguson was shot dead and dragged by his horse.

Seeing their commanding officer shot and killed, the Loyalists began to surrender. However, the Patriots were eager to avenge the Battle of Waxhaws (or “Tarleton’s Quarter”) where a sizable number of Patriot soldiers were massacred after attempting to surrender. Many Patriots refused to recognize the show of surrender with yells of “Give ’em Tarleton’s Quarter!” Eventually, the Patriot officers restrained their men and accepted the Loyalist surrender. 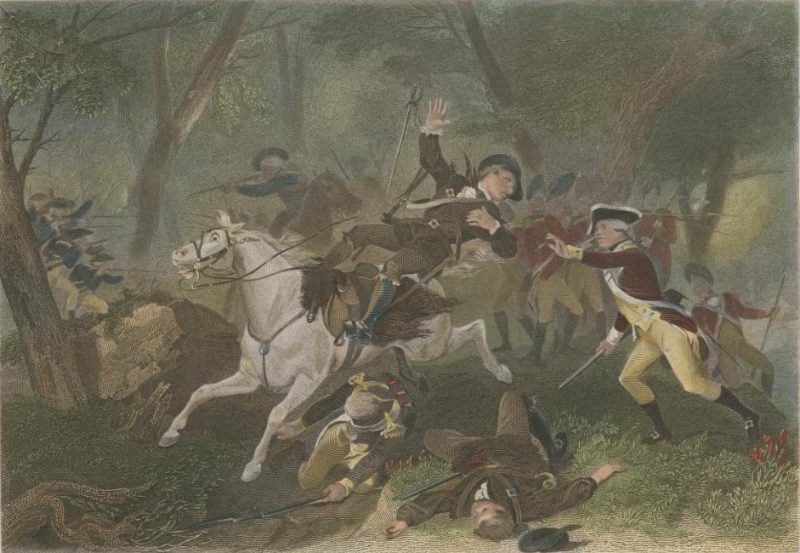 The battle lasted all of 65 minutes and resulted in 290 Loyalists killed, 163 wounded, and 668 taken prisoner. The Patriot militia suffered 28 killed and 60 wounded. Major Ferguson was the only British casualty.

After the victory at Kings Mountain, considered by some to be the turning point of the American Revolution, Joseph Greer was dispatched by Colonel John Sevier to carry the message of victory to General George Washington and the Continental Congress in Philadelphia. It took him some thirty days on foot and horse while enduring the wilds of the country, the threat of hostile Indians, and the snow and rain of a severe winter to arrive with musket and compass on November 7, 1780 at the session of Congress, a 600 mile trip.  It is said that the Indians shot his horse from under him and on one occasion was hiding inside a hollow log while the Indians sat on it.  His entry to the Congress was restrained because he was unknown, however he pushed his 6 foot 7 inch frontiersman stature through the door and delivered his message to a stunned and disbelieving Congress.  Seeing his size and courage, they were heard to say “with men of his size and strength, no wonder the frontier patriots won.”