Editor’s Note:  This article is in a series about the heritage of our marksmanship challenges.  Click here for the introduction to the series.

If you attend a Revere’s Riders rifle event, you’ll have a chance to try your hand at shooting “Morgan’s Shingle.”  We have a version scaled for 25 yards, one for 100 yards, and of course at a known distance event you may be able to shoot the shingle at distance.  Regardless of the version, the shingle is scaled to represent a board 7″ wide and 10″ tall placed at 250 yards. 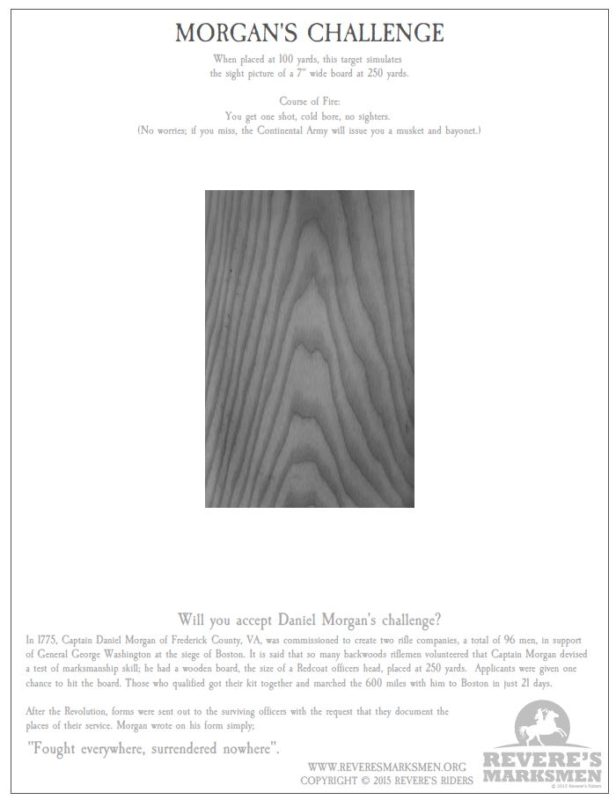 Morgan’s Shingle — harder than it looks!

On June 14, 1775, Congress voted to raise ten companies of “expert riflemen.” As the legend goes, Daniel Morgan, a frontiersman from rural Virginia, held contests like other rifle captains to determine which volunteers where the best shots. “One captain drew a nose on a flat board one foot square, propped the board against a tree 150 yards away, and announced that we would accept those whose bullets came closest” (Higginbotham 23). Other sources put the board at varying sizes and distances. While perhaps apocryphal, this story is part of the mythos of the American Marksman.

We celebrate the heritage of this famous test with our “Morgan’s Shingle” target. Our version of the target represents a colonial shingle at 250 yards.  Rifleman think in “minutes of angle” which is a way to compare the relative difficulty posed by targets at different distances.  For example, a 12″x12″ board placed at 150 yards is 7.6 x 7.6 MOA.  Our 7″x10″ shingle — based on the size of colonial-era shingles — at 250 yards represents a target 2.7 x 3.8 MOA in size.  So it is at least as challenging as the first tale, and likely on par with some of the other challenges used by colonial riflemen.

Even with the advantages of modern firearms and optics this can be a tough hit to guarantee.  Join us at an event and give it a shot!